Pickleball is a racquet sport that combines elements of badminton, tennis and table tennis. Two or four players use solid paddles made of wood or composite materials to hit a perforated polymer ball over a net. The sport shares features of other racquet sports, the dimensions and layout of a badminton court, and a net and rules similar to tennis, with a few modifications. Pickleball was invented in the mid 1960s as a children’s backyard pastime but has become popular among adults as well.

The game started in America during the summer of 1965 on Bainbridge Island, Washington, at the home of former State Representative Joel Pritchard. He and two of his friends, Bill Bell and Barney McCallum, returned from golf and found their families bored one Saturday afternoon. They attempted to set up badminton, but no one could find the shuttlecock. They improvised with a Wiffle ball, lowered the badminton net, and fabricated paddles of plywood from a nearby shed.

Although some sources claim that the name “Pickleball” was derived from that of the Pritchard’s family dog, Pickles, the name actually came from the term “pickle boat”, referring to the last boat to return with its catch. According to Joan Pritchard, Joel Pritchard’s wife, the name came “after I said it reminded me of the Pickle Boat in crew where oarsmen were chosen from the leftovers of other boats. Somehow the idea the name came from our dog Pickles was attached to the naming of the game, but Pickles wasn’t on the scene for two more years. The dog was named for the game.” 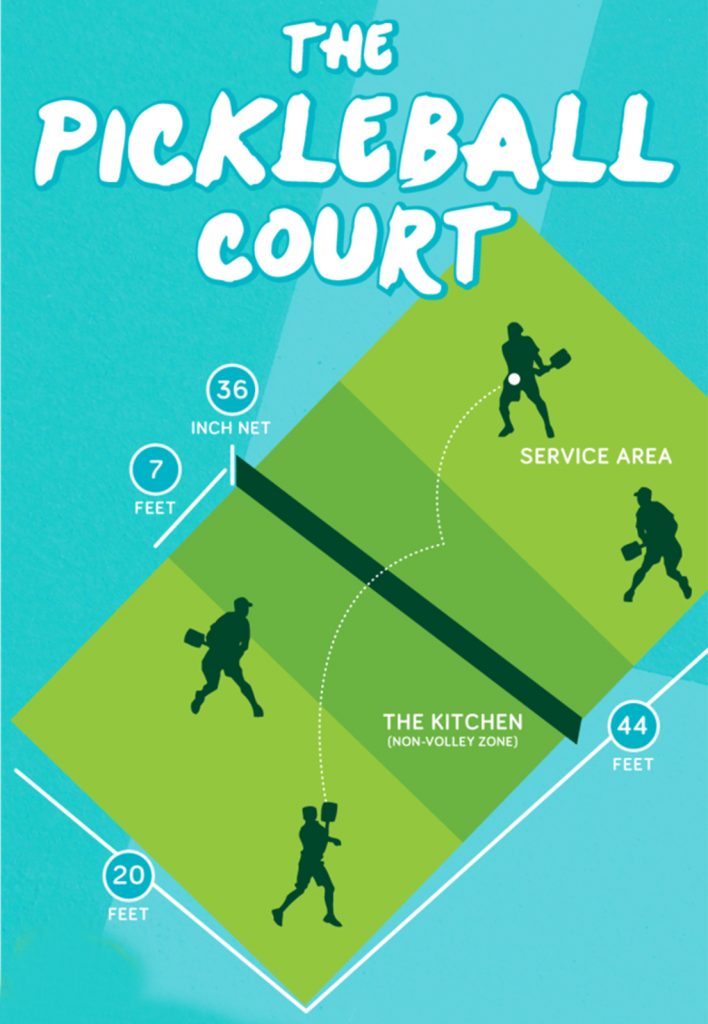 The serve must be hit underhand (subject to the “drop serve” currently being trialled) and each team must play their first shot off the bounce. After the ball has bounced once on each side, then both teams can either volley the ball in the air or play it off the bounce. This is called the “double bounce rule” because the ball must hit twice (once on each side) before it can be volleyed. This eliminates the serve and volley advantage and prolongs the rallies.

Both players on the serving team are allowed to serve, and a team shall score points only when serving.  A game is played to eleven points and a team must win by two points. Rallies are lost by failing to return the ball in bounds to the opponent’s court before the second bounce, stepping into the non-volley zone and volleying the ball, or by violating the double-bounce rule. The hand is considered an extension of the paddle.  The player loses the rally if the ball hits any other part of his body or clothing. 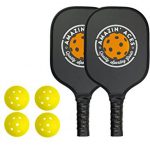 At the beginning of the serve, both feet must be behind the baseline. At the time the ball is struck, at least one foot must be on the playing surface behind the baseline and the server’s feet may not touch the playing surface in an area outside the confines of the serving area. The serve is made underhand (subject to the “drop serve” currently being trialled). The paddle may not contact the ball above the waist. The serve is made diagonally cross court and must clear the non-volley zone.

The non-volley line is a short line for the serve (the serve is a fault if it hits the line).  All other lines are good at all times.  Only one serve attempt is allowed. If the serve touches the net and lands in the correct section of the court it is a good serve. At the start of each new game, only one player on the first serving team is permitted to serve and fault before giving up the ball to the opponents. Thereafter both members of each team will serve and fault before the ball is turned over to the opposing team. When the receiving team wins the serve, the player in the right hand court will always serve first.